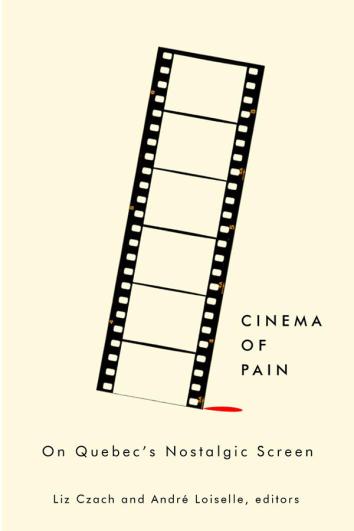 Since the defeat of the pro-sovereigntists in the 1995 Quebec referendum, the loss of a cohesive nationalistic vision in the province has led many Québécois to use their ancestral origins to inject meaning into their everyday lives. A Cinema of Pain argues that this phenomenon is observable in a pervasive sense of nostalgia in Quebec culture and is especially present in the province’s vibrant but deeply wistful cinema. In Québécois cinema, nostalgia not only denotes a sentimental longing for the bucolic pleasures of bygone French-Canadian traditions, but, as this edited collection suggests, it evokes the etymological sense of the term, which underscores the element of pain (algos) associated with the longing for a return home (nostos).

Whether it is in grandiloquent historical melodramas such as Séraphin: un homme et son péché (Binamé 2002), intimate realist dramas like Tout ce que tu possèdes (Émond 2012), charming art films like C. R.A. Z.Y. (Vallée 2005), or even gory horror movies like Sur le Seuil(Tessier 2003), the contemporary Québécois screen projects an image of shared suffering that unites the nation through a melancholy search for home.

To view the full Table of Contents, please click here.

The Canadian Horror Film: Terror of the Soul

Featuring chapters on Pontypool, Ginger Snaps, 1970s slasher films, Quebec horror, and the work of David Cronenberg, among many others, The Canadian Horror Film unearths the terrors hidden in the recesses of the Canadian psyche. It examines the highlights of more than a century of Canadian horror filmmaking and includes an extensive filmography to guide both scholars and enthusiasts alike through this treacherous terrain.

These excellent essays identify precisely what sets the Canadian horror film apart from its American and British brethren…. Highly recommended.

An interesting and wide-ranging collection that makes a valuable contribution to work on both Canadian film and the genre of horror.

This volume represents a welcome expansion of both horror film studies and Canadian film studies.