During that first visit to a new city, it can be difficult to cover all of the major tourist hot spots and follow up on all the recommendations that your friends and family send your way. My recent trip to the ‘Big Easy’ was brief but jam-packed, and even though I still had a lot to check off of my ‘To-Do’ list, I was able to cobble together a pretty solid collection of my favourite things, featured here in no particularly ranked order.

It’s important to arm yourself with knowledge of the city you’re visiting. At this shop (714 Orleans St.), I found my first souvenir – a

great watercolour print by traveller, artist and former visitor to New Orleans, Gersin. I also picked up his book New Orleans Sojourn, created from his paintings and sketches of the city and its offerings – a travel journal basically, complete with scrawled notes and insights! I was so intrigued by the city’s ghost stories that I ended up stopping by a second time to buy a copy of Spirits of New Orleans, a book which seems to have the best collection of tales of terror. If you visit this shop too, make sure to ask the proprietor, Russell, for recommendations of the city’s local highlights! 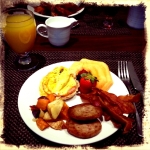 Right across the street, you’ll find a great brunch place – the Roux on Orleans (a small restaurant located within the excellent and apparently very haunted Bourbon Orleans Hotel, 717 Orleans St. – easy access for my travel mate and I, since we stayed on the first floor!). A buffet-style spread of eggs benedict, fresh fruit, bacon, and a multitude of other breakfast staples are offered, along with a beverage, for one of the most reasonable prices in the city.

From impromptu performances on the streets, to the locals’ favourite clubs on Frenchmen St., to raucous tourist bars, music certainly is everywhere you go! I stopped to listen to these Pre-World War II Ragtime, Blues, and Jazz fellows – The Slick Skillet Serenaders; they played on Royal St. one morning, entertaining the crowds with cigarettes propped in their mouths.

Our guide at the The New Orleans Pharmacy Museum (514 Chartres St.), Matthew, reminded us that it is all too easy to fall into 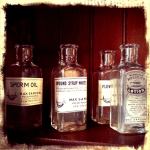 the habit of romanticizing the past. New Orleans began as an important port town. Combined with the fact that it was built over a swampy region, this meant that in its early years, the city experienced periods of rampant disease. This museum was the site of the first licensed pharmacist, and even more interestingly, the property stands only feet away from what was once the market exchange site where human-trafficking took place during the slave-trade. Over the course of the one-hour tour, our group also learned of the crude evolution of the syringe and needle; the early uses of opium and heroine; the classic model of the soda fountain; the horrors of purgative medicines; strange implements; and even stranger practices. This tour was unsettling, but incredibly interesting.

Besides its bright lights, strange smells, and bustling tourist crowds, Bourbon St. is also a 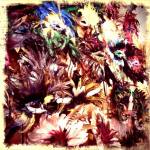 spot to find glittery, inexpensive souvenir Mardi Gras masks – and many are on discount the week after the main event. It’s worth shopping around a bit first though – the same or similar design can be found from one shop to the next, and a better bargain can usually be found. If you stroll down Royal St., you’ll see that a couple of shops with unique designs that even make masks in workshops on the premises.

If you happen to miss the parades and festivities of Carnival season, don’t worry – you

can still get a behind-the-scenes look at the parade floats, props, and costumes (and even get a sample of King Cake!) by visiting Mardi Gras World. Bonus: it provides a free shuttle from Canal St. and from the French Quarter. Added bonus: Bolton (a New Orleans local) might be your driver – which means you get a fantastic, animated storyteller who’ll point out local facts and landmarks!

Mardi Grad World has in its holdings a small array of costumes on display in the gift-shop and lobby area. I loved the colour, material and design, and am convinced that I would fit right in with the festivities if I had a fun frock like this to wear during celebrations. 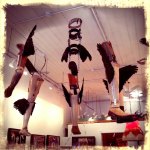 Whether you’re scoping out the street displays or the art galleries, do take time to peruse some local art. My favourite collection was at the Antieau Gallery (927 Royal St.), which featured a display of strange and whimsical pieces created by artist, Chris Roberts-Antieau. My favourites were this piece entitled, “Phantom Limbs”, and the memorial pieces to the legs of soul and funk singer, James Brown.

This was one of the stops we made with Buzz Nola Bike Tours (214 Magazine St.). 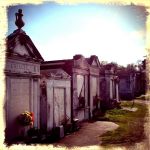 Although our group didn’t spend too much time traipsing among the tombs, our guide, Erin, provided some great historical factoids (and debunked a few myths as well) about the internment practices for New Orleans’ cemeteries. Since this particular cemetery is distanced from the high-traffic of the French Quarter, the tombs seem to be in better shape, making for slightly more pleasant – if yet eerie – photos.

The supposed final resting place of Louisiana Creole practitioner ofVoodoo, Marie Laveau, is located in the cemetery closest to the

French Quarter – St. Louis Cemetery No. 1. Due to the new rules set in place by the Archdiocese (which took effect as of March 1st, 2015), tourists are now only permitted entrance with a tour group or guide. When I visited, a crew was in the middle of repainting the cemetery’s outer walls, and Laveau’s tomb was one of the first of the heavily vandalized tombs to have been restored.

Interview with the Vampire Shoot Locations

Always fun to see locations where films were shot. One was pointed out to me while on a haunted walking tour – Madame John’s Legacy, (632 Dumaine St.). A street-view of this property is shown briefly in the film, when caskets are being removed from the building.

On that same haunted walking tour, our group hovered outside of this more notable and 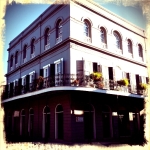 considerably more spooky property (1140 Royal St.). The LaLaurie house seems to be haunted by the horrors of its past, in which one of the more infamous owners, Madame Delphine LaLaurie, mutilated her enslaved servants. Our guide indicated that since then, the property has oddly changed hands at a pretty frequent rate – in fact, no person has held ownership over the property for longer than 6 years (including the eccentric Nick Cage).

Thanks to the leisurely ride with Buzz Nola Bike Tours (seriously, loved this business – definitely look them up!), I had the

opportunity to expand the geographic reach of my visit by touring the shotgun houses in the Irish Channel, as well as the lower Garden district and the Garden District proper. This latter, more opulent neighbourhood features a fascinating array of mansions with a mix of architectural influences: Victorian, Greek Revival, and Colonial. Bonus: our tour guide pointed out a number of homes previously or currently owned by various celebs: Sandra Bullock, Nick Cage, Anne Rice, and John Goodman, to name a few!

Loved the colours of this quaint place. One of the common styles of houses found in New Orleans, especially in the Irish Channel, or in the area surrounding the French Quarter as this one was, the shotgun style house is a long, narrow building whose rooms are stacked one behind the other. The concept is that if you fired a gun through a door at one end of the house, the bullet would travel though every room and out the door at the opposite end without hitting anything. In theory. 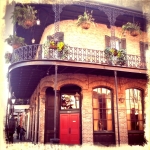 When I visit a new city, I like to pick out the buildings that I would make my place of residence, if I had the power/money. This one in particular caught my eye because of its red door, but it’s overall façade and central location on Royal St. cemented its appeal. It was also one of the few residences whose shutters were actually open so that I could catch a glimpse inside while passing by. What can I say? I’m curious.

Saving the best for last! Obviously, one of the top reasons to visit this fascinating city is to try as many of the local flavours and as

much of the Cajun-Creole cuisine as possible. People rave about the yummy beignets at Café du Monde, but I must say another place left a greater impression on me. I seldom return to the same restaurant on a trip, but in the heart of the French Quarter is The Original Pierre Maspero’s Cajun Restaurant (440 Chartres St.), my go-to spot for a second sampling. This historic place had an intimate atmosphere, friendly staff, and delicious things to eat – better than a home-cooked meal! I especially recommend the crab cakes and the shrimp jambalaya.

Hope you enjoyed these highlights. Thanks for reading!