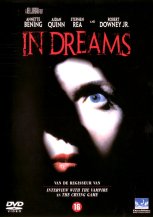 I have been thinking about Neil Jordan’s In Dreams (1999) a lot lately for some reason. As luck would have it, a DVD copy appeared to me mysteriously from within a $9.99 bin at a music and film store, and so I purchased it and rewatched it this past weekend. Having been a while since I last watched it, I was skeptical about how well it would hold up to my expectations.

It did very well.
The narrative builds from an incredibly interesting idea: sunken villages. The concept is just so fascinating and it turns out that it’s more common that you would think. This aerial image is from an exhibit on sunken villages in the St. Lawrence Seaway. On July 1, 1958, the St Lawrence Seaway flooded out 6,500 people & inundated 10 communities, some over 200 years old. For 50 years the murky water hid their roads, foundations, bridges & much more. With water clarified by the zebra mussel the communities have reappeared – you can clearly make out the roadways and the foundations of buildings and houses. Though there are no aerial shots of the submerged town in Jordan’s film, the underwater scenes are unnerving.

The synopsis of In Dreams involves a young boy, chained to his bed (presumably by his terrifying mother who is marred by a bad marriage) and left for dead in his hometown which is being flooded to make way for a reservoir. Years later, a series of murders befalls the surrounding region, in which young girls are kidnapped and found weighted down in the reservoir with stones in their pockets.

Claire (Annette Bening), an illustrator and troubled psychic experiencing recurring images of these events, struggles to comprehend their meaning, only to become a grieving parent when her own daughter is taken during an outdoor performance of “Snow White”, and led to the same fate. Claire’s husband (played by Aidan Quinn) is the distraught father, whose career as a pilot frequently takes him away from his family, though he, too, becomes trapped in the murderous game played by the culprit, Vivian Thompson (Robert Downey, Jr.), the still-suffering man-child with a Norman Bates-like ambivalence for his mother.

The film is based on Bari Wood’s novel Doll’s Eyes, which I fully intend to check out as well.

Further to this, I’ve recently become totally engrossed in the French supernatural drama, Les Revenants, a fantastic series set in and around a reservoir and a flooded town. I highly recommend this show, but be prepared: it’s heavy stuff.  ♦