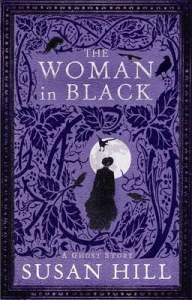 On a dreary day such as this one, I am reminded of one of my favourite books – The Woman in Black by Susan Hill. This is a terrific gothic ghost story about a young solicitor who travels to a remote English estate to sort out the affairs of its recently deceased owner. While there, he learns of a spectre that haunts the nearby village. The writing style is phenomenal: the sounds and sensations are exceptional and palpable.

First published in 1983, this narrative has been reincarnated in various forms (a TV movie, a feature film starring Daniel Radcliffe, a tremendously popular stage play, and so on). I would also recommend the  recent novella The Man in the Picture (2007). I’ve only just picked up a newly released edition of The Mist in the Mirror (1992), but I have the same expectations of it as the others. I am eager to get my hands on a copy of Dolly, the most recent release from Hill.

Doesn’t seem to be available quite yet on this side of the ocean, but until it is, I will bury myself in another work and be satisfied with the nightmares it gives me.♦